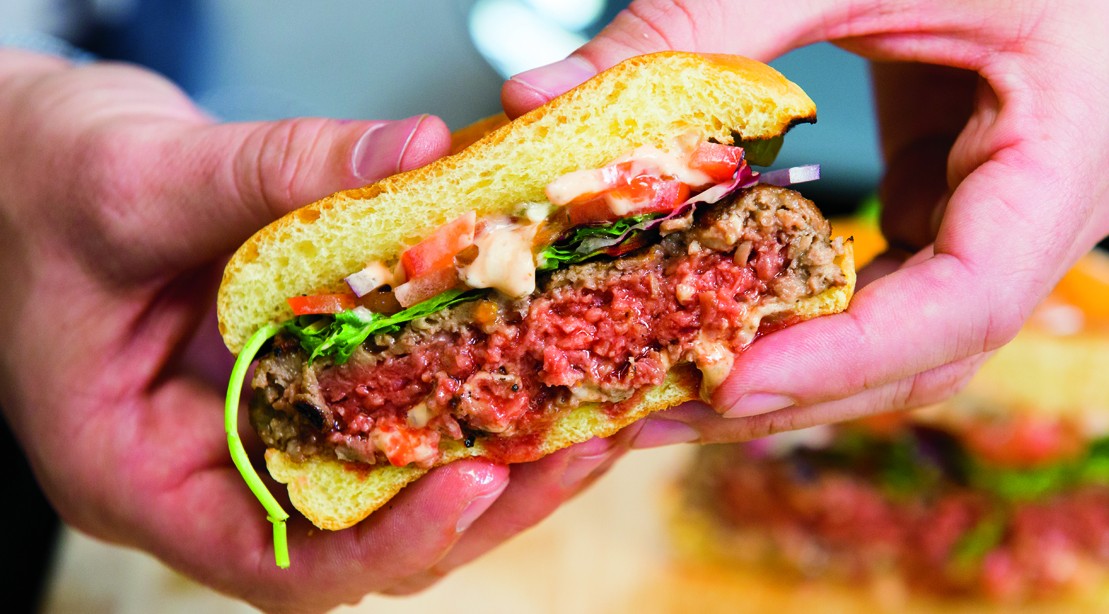 You know you should eat less red meat. Despite its ability to beef you up, a diet built on steak and burgers ups your chances of heart disease, cancer, and diabetes—three leading killers for men in the U.S. Plus, livestock production is driving environmental destruction. In fact, a massive worldwide study analysis in Science last year reported the single biggest way to reduce your impact on the planet is by avoiding meat and dairy.

The problem? Red meat is just so damn delicious.

California-based startup Impossible Foods wants to offer you a win-win: a meatless burger that tastes and actually “bleeds” like ground beef; boasts as much protein and less fat than its bovine brethren; and is grown in a lab, thus using 95% less land, 74% less water, and creating 87% less greenhouse gas emissions than the traditional kind.

This lab-grown patty, the Impossible Burger, is emerging at the right time, when issues of environment and food sustainability are making their way to the forefront of the cultural conversation. As such, it has created a unique cross section of curious onlookers, from traditional food websites and magazines reporting on the burger’s ability to mimic beef in almost every way, to high-profile tech and business outlets taking note of the company’s leaps forward in engineering and green initiatives. And with the announcement of the even juicier, beefier, more cult-worthy Impossible Burger 2.0 at the 2019 Consumer Electronic Show (CES) in January, it looks like this beef-free revolution is just getting started.

THE BIRTH OF THE BURGER

In 2009, Stanford biochemist Pat Brown, M.D., PhD., took an 18-month sabbatical to consider a pretty heavy topic: how he could impact climate issues. It didn’t take long for him to zero in on livestock production. “Cows are alive for a long time, they eat a lot of food, and they are very gassy, producing a lot of methane,” says Rebekah Moses, senior manager of impact strategy at Impossible Foods. Even conservative estimates say beef production is responsible for six times more greenhouse gases and 36 times more land use than plant proteins.

When Brown founded Impossible Foods in 2011, he realized that to make a dent in our environmental impact with a plant-based burger, it would have to taste as good as—or better—than beef. His team found a secret: “Other products use synthetic flavor mixtures to mimic the taste of meat, but we looked at the chemical reaction that happens when the protein and sugars hit the heat, and re-created that synthetically instead,” says Laura Kliman, Ph.D., senior flavor scientist at Impossible Foods.

Turns out, a single molecule called heme is responsible for pretty much everything from a burger’s signature iron taste to the caramelized browning against a hot grill. The IF team worked through more than 100 prototypes before perfecting a synthetic heme made from the molecule’s close plant relative, soy leghemoglobin. Countless recipes followed, until the team settled on the most meat-mimicking mix of textured wheat protein, coconut oil, potato protein, vitamins, and a binder of xanthan and konjac gum.

The Impossible Burger debuted in 2015, and the team’s long road to nail down the perfect recipe was starting to pay off. Within a year, the burger was added to the menu of David Chang’s famous Momofuku Nishi in New York. Within three, it was in more than 5,000 restaurants in the U.S. and Asia, including major sports bars and high-profile chains like Red Robin, the Cheesecake Factory, and White Castle.

It was at CES—a show typically dedicated to unveiling the latest technological innovations—that the company announced its first recipe revamp, which took just six months to nail down, Kliman says. The goal was a simple one: to make an even beefier burger so more meat lovers would convert and they did a damn good job!

Once cooked, the new Impossible Burger 2.0 looks nearly identical to crumbly ground beef, smells like hot fat sizzling, and, at medium-rare, bleeds so believably it would make carnivores stop in their tracks. It boasts less sodium, saturated fat, and total fat than the flagship, but the biggest change was in trading the original wheat protein for soy. Now, before you start down that road, let’s clear something up: “Soy is a dense source of amino acids that builds muscle just as well as meat,” confirms sports nutritionist Ryan D. Andrews, R.D., author of A Guide to Plant-based Eating. In fact, Harvard researchers report that people who hit a high daily protein count built the same amount of strength and lean muscle mass regardless of what percent of their daily macros came from animals versus plants. Considering the Impossible Burger clocks in at 27 grams of protein per four ounces (19 grams for the new formula)—the same as a serving of 80/20 ground beef—your workout results won’t suffer.

And no, you won’t grow man boobs, either. “Most men, especially in the U.S., would be completely fine eating more soy—even one serving a day would have zero impact on your reproductive hormones and would probably actually benefit your health,” Andrews says. The switch to soy offered a grab bag of solutions, including making the burger gluten-free. “Soy protein also changed the texture of the burger and has a much more neutral flavor, so we were able to make the 2.0 much beefier in taste and have more of that coarse grind of a high-quality beef burger,” Kliman says. Her team also changed the binder to potato protein, which releases water upon cooking, delivering that signature juiciness of a burger.

And if the idea of “meat” grown in a lab instead of on a farm weirds you out, consider this: Compared with the amount of manipulation involved in the vast majority of American animal feeding operations, it’s really not any more unnatural than the “natural” beef we eat, Andrews points out.

Impossible Foods has set the goal of eliminating animals in food production by 2035, and Brown recently announced they’re coming after steak next. Meanwhile, the 2.0 will be rolled out to all 5,000-plus restaurants nationwide by the time you’re reading this. What’s more, the mouth­watering meat substitute will also be in grocery stores for the first time later this year, letting you experiment with it in any beef recipe, from meatballs to tacos, even dumplings.

For now, being widely available to consumers—and offering an even more mouthwatering product—is most important for impact, says Moses. If Joe Smith in Ohio can go to his local White Castle and order an Impossible Slider instead of beef, the environmental benefits will add up over time.

All images courtesy of Impossible Foods